Do you dream of playing at the college level?

Do you want to learn from College Coaches and Pro Players?

Do you want to be the best player you can be?

If yes, then this is the camp is for you!

Join us for our Division 1 Coaches’ Camp, where you’ll learn from some of the best coaches in the nation! Each week a different D1 baseball coach will lead our campers through drills and lessons that will make them better players on and off the field. Assisted by professional baseball players, each session will focus on both fundamentals and skills specific to their position. Sessions are 11/12-12/17, with an off day the Saturday following Thanksgiving (11/26).

Tuition is $100 per session, or $400 for all 5 weeks of camp, a 20% discount! See the link below for signups, space will be extremely limited to ensure a low player-to-coach ratio! DM or email us for more info: info@momentumsportsny.com 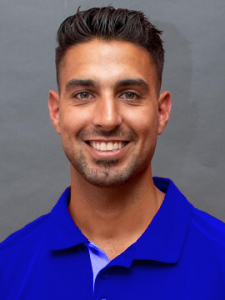 An All-American shortstop for the Pirates and an MLB Draft selection of the Chicago Cubs, Giuseppe Papaccio enters his first season at his alma mater as associate head coach.

Papaccio returns to South Orange following a successful four-year tenure as associate head coach and recruiting coordinator at NJIT. He most notably helped guide the Highlanders to the 2021 America East championship and a victory at the NCAA Regional that season in Fayetteville, Ark.

This will be Papaccio’s second coaching stint at his alma mater after serving as a volunteer assistant coach from 2017-18.

During the 2022 season, the NJIT offense turned in one of the best years at the plate in school history.  Under Papaccio’s guidance, the NJIT offense set school records in hits, doubles, triples, home runs, walks, RBI, extra base hits, total bases, stolen bases, on-base percentage, slugging percentage and OPS.

A native of Essex County, hailing from Nutley, Papaccio coached the Highlanders to the first NCAA postseason victory in school history in any sport with a 3-2 win over Northeastern in the 2021 NCAA Tournament. Papaccio also helped the NJIT offense reach new heights in 2021 as the program broke many records and had several players earn individual accolades. In America East play, the Highlanders led the conference in hits, doubles, home runs, total bases, and stolen base percentage and finished second in runs, RBIs, walks, and hit by pitches.

The program was rewarded for its successful season with plenty of individual accolades with Jake Rappaport (First Team) and Julio Marcano (Second Team) earning NJIT’s first-ever ABCA Division I All-Region honors. Rappaport and Marcano were joined by Albert Choi as First Team All-America East recipients, while David Marcano and Ryan Fischer were named Second Team All-America East. Choi was tabbed as the league’s Rookie of the Year and was joined on the All-Rookie Team by Fischer.

Papaccio joined the Highlanders after serving two seasons as a volunteer assistant coach with the Pirates and one season under fellow Seton Hall alum Jim Duffy at Manhattan College. His other coaching stints includes stops as an assistant coach for the Orleans Firebirds in the Cape Cod League (2018) and as head coach of the Ocean Giants (2017) and Monmouth Monarchs (2016) both of the Atlantic Baseball Collegiate League.

As a senior at The Hall in 2013, Papaccio had one of the finest offensive seasons in Seton Hall history.  Unanimously named a First Team All-BIG EAST selection and New Jersey Collegiate Baseball Association’s (NJCBA) Player of the Year, he finished ranked third in the BIG EAST with a .365 batting average and led the conference in doubles.  Further showing his prowess for the two-base hit, Papaccio set Seton Hall’s career record with 56 doubles and tied the single-season Pirate record with 24.  Batting primarily in the cleanup position in the Seton Hall lineup, Papaccio led the Pirates in seven offensive categories, including batting average, slugging percentage and RBIs.

With 237 career hits, only three players in Pirates’ history have garnered more.  Only two Pirates have played in more games and only former teammate A.J. Rusbarsky had more at bats.  Named to the Louisville Slugger NCAA Division I All-American Third Team by Collegiate Baseball, he was drafted in the 18th round by Chicago on June 8, 2013. 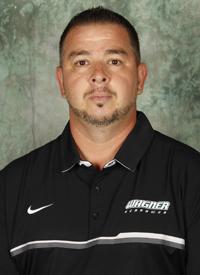 Noto, no stranger to the Northeast Conference (NEC), helped guide the Seahawks to three straight league tournament appearances in 2017-19 in his role as an assistant coach and recruiting coordinator.

In 2020, Noto moved past four coaches to become the seventh winningest coach in Northwoods League history. The Rafters finished the season with a 35-11 record. In 2019, he led the team to its fifth division title and third postseason appearance.

Before arriving on Grymes Hill, Noto spent nine seasons as an assistant coach with Long Island University. On the field, he recruited and coached 14 All-NEC selections to go along with six All-Region honorees. He was instrumental in the development of James Jones, who became the program’s first MLB player when he was selected in the fourth round of the 2009 MLB Draft by the Seattle Mariners.

Noto worked for the Bergen Beach Youth Organization before his tenures with LIU and the Rapids Rafters. He was an assistant, head coach, and recruiting coordinator for the organization from 1993 to 2005. During his time, he coached/recruited over 120 MLB draft picks, 27 of which reached the majors and six who were on active 2016 MLB rosters.

Noto has strong ties to Staten Island. He attended St. Peter’s Boys High School and returned to the school as the assistant coach from 1993-96 and again in 2001. Noto spent two seasons at St. Joseph by the Sea High School under Gordon Rugg Sr. He earned his Bachelor of Arts degree in Criminology from John Jay College while playing for legendary New York City coach Louie DeMartino. 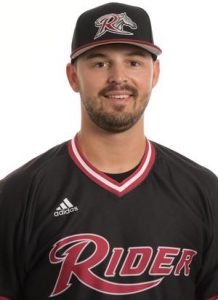 Lee Lipinski ’16 enters his fifth season as an assistant coach for the Broncs during the 2022 season. This is Lipinski’s 10th consecutive year as a member of the Broncs Baseball Program, playing five years and captaining two teams. Lipinski was a part of two regular season championships (2013 & 2015) and played in three MAAC tournaments during his tenure as a player. Lipinski joined the staff for the 2018 season after leading the Broncs to their first Metro Atlantic Athletic Conference (MAAC) Tournament win since 2013.

“Lee is a welcome addition to our coaching staff,” Davis said. “As a former captain and five-year player, Lee brings experience of playing in our system, which is vital to reducing the learning curve many others do not have.”

Lipinski will have a number of responsibilities. He will work closely with the team’s catchers, hitters and coach third base as well as assist with recruiting. He has helped in the development of two All-MAAC players, Joe Simone (First Team OF, 2018) and Riley Mihalik (Second Team 1B, 2019).

As a student-athlete, Lipinski posted a career batting average of .237 thanks to hitting a career-best .291 during the 2017 campaign. He amassed 115 career hits, 14 career homeruns, 80 RBIs, and touted a .706 OPS. Lipinski’s career was highlighted by game winning home runs against Kent State (2015) and VMI (2016). Lipinski threw out 50 runners attempting to steal in his career, highlighted by a career-best and MAAC leading 24 in his final season with the Broncs. He also posted a fielding percentage of .979 in 144 career games. 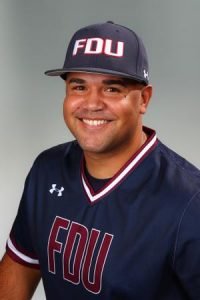 FDU baseball head coach Rob DiToma announced the addition of Emmanuel “Manny” Roman-Castillo as an assistant coach ahead of the 2022 season.

“I am beyond excited to have Manny join our coaching staff,” DiToma said. “He brings energy and passion and an ability to relate to our players that will be extremely helpful everyday. Both our players and I will benefit greatly from his intellect and work ethic.”

Roman joins DiToma’s staff following a four-year stint as the recruiting coordinator and pitching coach at Monroe College in New Rochelle, N.Y. At FDU, he will assist the staff by working with pitchers on the field and take to the road to support the Knight’s recruiting efforts.

During his time at Monroe, Roman contributed to four regional championships and appeared in two JUCO World Series. He has proven success as a coach with having coached three All-American pitchers, three MLB draft picks and having over 30 players recruited to NCAA and NAIA institutions.

Previously, Roman served as the head coach at Raritan Valley Community College and as an assistant coach and recruiting coordinator at Lackawanna College in Scranton, Pa. where he contributed to a 2015 regional championship.

A Carolina, Puerto Rico native, Roman graduated with his Bachelor’s of Science in Sport and Recreation Management from Keystone College in La Plume, Pa. 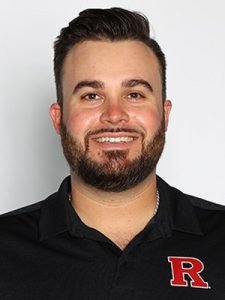 Peter Barron is in his sixth year on the Rutgers baseball staff. As the director of baseball operations for the Scarlet Knights, Barron oversees all administrative aspects of the program, including on-campus recruiting, opponent analysis, game preparation, practice reviews and organizing team travel among other duties. He also supervises a group of student managers, helps with fundraising and is the liaison to departments within athletics.

Before arriving in Piscataway, Barron spent two seasons as the director of baseball operations at St. John’s. He helped with all aspects of the program, including apparel, equipment, team travel, meals, video, statistics and game charts. Barron also oversaw a staff of five student managers, assisted with team community service and served as the liaison between the coaching staff and departments within athletics.

Barron started off as a student manager for the Red Storm in Sept. 2012 and served three seasons before joining the staff as a graduate assistant. He managed equipment and player development video among other duties, working as the head manager in 2014 and 2015.

In addition to working in operations, Barron has coaching experience with summer teams and camps. He served as an assistant coach for the Shelter Island Bucks in the Hamptons Collegiate Baseball League during the summers of 2016 and 2017, coaching third base, handling roster construction, community outreach and mentoring the position players.

Originally from Long Valley, New Jersey, Barron owns two degrees from St. John’s. He earned his master’s in sports management in 2017 and his bachelor’s in marketing in 2015.

There are no reviews yet.

Only logged in customers who have purchased this product may leave a review.